Navigating along the Nile from Luxor to Assuan

A wonderful 9 day journey which includes a cruise along the Nile river, and in which we are immersed in the millenary egyptian civilization. This journey is filled with the biblical memories of Moses and of the Exodus journey which the jewish people undertook towards the Promised Land.

The journey starts in Cairo, Egypt's bustling capital city. Here the magnificent Pyramids of Cheops, Khafre, and Menkaure await us along with the Sphynx and the Egyptian Museum where there is a breathtaking collection of egyptian antiquities such as the treasure of Tutankhamun.

We will also visit places of islamic tradition such as the Citadel, the Mosque of Muhammad Ali, the Bazaar of Khan el-Khalili.

We will see the christian area of old Cairo with the Coptic Churches which give witness to a christian minority which has survived throughout the ages.

Nearby Cairo we will visit Memphis, ancient capital city of Lower Egypt, and Saqqara with Djoser's Step Pyramid and the Serapeum.

We will descend into the Valley of Wadi Natrun to visit the Monasteries where eastern monasticism began around the year 330 A.D.

Then we will fly off to Luxor where the ancient city of Tebe was located and which was the capital of Egypt at the time of the Middle Kingdom.

Many pharaohs left the indelible mark of their grandeur here, in the majestic palaces and temples and in the royal tombs which were secretly placed in the surrounding valleys.

Many of these rest in the Valley of the Queens and the Kings, where in 1922 the tomb of Tutankhamun was discovered. Other wonders: the funerary temple of Queen Hatshepsut in Deir El Bahari, the Colossi of Memnon,  and the immense temples of Luxor and Karnak.

Then we will continue by navigating up the Nile river towards Assuan on a modern river cruise along cultivated shores which border arid desert places. Along the route we will come across splendid temples such as that of Edfu dedicated to Horus, which is considered one of most well preserved in Egypt, and that of Kom Ombo dedicated to Sobek, the crocodile divinity and to Haroeris, the healer divinity.

In Assuan we will see the modern dam and the temple of Philae in Lake Nasser with it's shrine dedicated to Isis. The shrine was saved from the waters thanks to the intervention of UNESCO.

From Assuan it is possible to take a plane ride to the majestic Abu Simbel temples which were built by Ramses II.

A journey which will leave an unforgettable impression.

Map of the journey
8 days 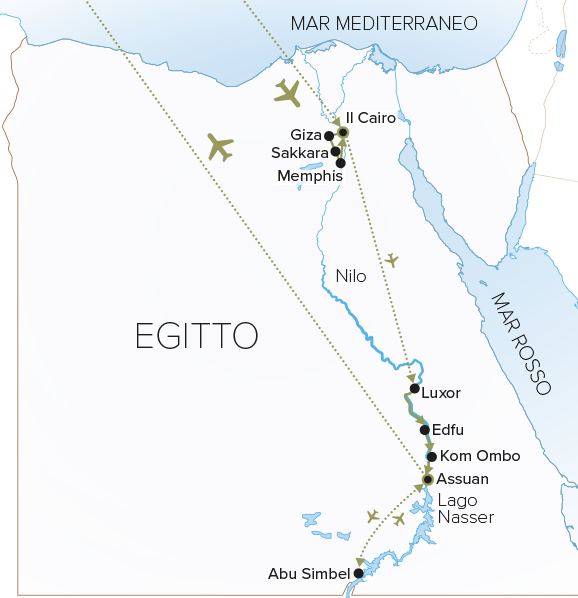 Departing flight from Rome for Cairo. Check-in to the hotel, dinner and overnight.

In the morning visit the Egyptian Museum, which has one of the best collections of egyptian antiquities in the world together with a number of greek-roman artefacts. The museum has the fabulous treasure of Tutankhamon with his well known funeral mask. In the afternoon we visit the old city: the Citadel, the Mosque of Muhammad Ali (the alabaster mosque) and the Bazaar of Khan el-Khalili, the Coptic Churches.

Departure for Memphis, ancient capital city of Lower Egypt, where we will see the alabaster sphynx and the colossal statue of Ramses II. From there we continue on to Saqqara with Djoser's Step Pyramid and the Serapeum, burial place for sacred Apis bulls. In the afternoon we will visit the majestic Pyramids of Cheops, Khafre, and Menkaure along with the Sphynx.

Early in the morning departure for the Wadi Natrun valley where eastern monasticism began around the year 330 A.D. Some monasteries are still today active. We will visit the monastery of St. Macarius and the monastery Amba Bishoi (at times visits are not available without any forewarning because of local festivities). Return to the hotel in CAIRO, check-in to the hotel, dinner and overnight.

Departing flight for Luxor. Board the motorboat. Lunch. Visit the Valley of Queens and Kings where Tutankhamon's tomb was discovered, and the funeral temple of Deir El Bahari, built by queen Hatshepsut. Visit the Colossi of Memnon. Visit the local christian mission.

Visit the temples of Luxor and Karnak. The Karnak Temple Complex is a UNESCO World Heritage site and is the second most visited historical site in Egypt. It's about 3 km. from the temple of Luxor to which it was connected by a pathway of sphinxes. Start the Nile cruise.

Today we will stop at Edfu to visit the temple of Horus which is considered to be the most well preserved in Egypt, and at Kom Ombo with it's temple on the shores of the Nile river dedicated to Sobek, the crocodile divinity and to Haroeris, the healer divinity.

Arrival in Assuan. Visit the Dam and the wonderful temple of Philae in Lake Nasser with it's shrine dedicated to Isis. The shrine was saved from the waters thanks to the intervention of UNESCO. We will ride in a traditional felucca on the Nile river. Visit to the local Christian community. Opportunity to make a reservation for a plane ride (or bus ride, as available) to the Temple of Abu Simbel. This optional reservation will be organized during the trip itself.

In the morning transfer to the airport and departing flight for Cairo to then continue from there to Rome.

OUR FEE DOES NOT INCLUDE

For non-Italian speaking pilgrims we can only take group requests, and we can organize a personalized experience with the group leader. Please contact our offices in order to receive information and pricing.